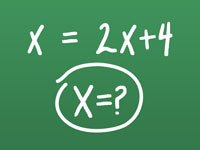 It’s probably safe to say that for everyone who had to go through Algebra in school, the use of the letter x in Algebra to represent an unknown quantity or variable has always been something of a mystery. We all asked why x in algebra is always the usual suspect, so to speak.

If you’re a teacher for children (school, home or otherwise) and you get asked this question about the x in Algebra in class, you can avoid being stumped by showing them this TED Talks video, which explains the origins of x as the unknown in Algebra.

The origins of x as the unknown in Algebra

In the video, speaker Terry Moore relates that the Spanish, regarded as the first ones to translate volumes of scientific and engineering knowledge from the Arab world, are the ones responsible for the use of the letter x in Algebra. He explains that the Spanish language doesn’t have the ‘sh’ sound that dominated the Arabic word for ‘something‘, they used the sound ‘k’ as in the Greek letter chi (χ) instead. These works were later translated to other languages, Latin in particular, and that is where the Greek letter chi (χ) got abbreviated to the Latin letter x because the symbols look quite similar.

Check out the video to get the whole story of why we use x as the unknown in algebra:

How To Spend An Amazing Weekend With Your Child