Things Moms Should Avoid Saying To Their Daughters 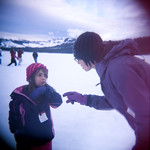 One of life’s most complex relationships is between a mother and her daughter. In many cases, it’s a love-hate relationship, where both love each other so dearly yet argue or even fight so often over just about everything that their relations end up being strained, sometimes for life.

While it’s understandable for kids being kids with all the tantrums, the mother, being the supposedly more mature one, should be the one who should keep her tongue in check. That’s because one demoralizing or even disparaging comment from a mother and the girl will carry the weight of that remark for years to come, resulting in, among other things, low self-esteem. There are just certain things moms should avoid saying to their daughters, and this is what Danielle Sullivan is getting at in an article she wrote for Babble.com

In Sullivan’s article, most of the things moms should avoid saying to their daughters are pretty common, and we all have probably heard our mothers say these around the house.  It’s but natural for moms to want their young daughters to be a bit more girly, to avoid getting dirty, to always smile and avoid being rude and to mind what other girls think. What they should realize, however, is that their daughters are individual human beings, and have their own preferences and temperaments. If they choose to be tomboys or if they want to experience playing in the mud, just leave them be. Mothers should do the same thing if their daughters don’t feel like smiling or if they find themselves in a situation which calls for a little rudeness. They surely wouldn’t want them to live their lives making decisions based on what other people think.

The others, however, are a little disturbing. While it’s common for moms to pressure their single, older daughters about their time to have kids of their own running out, it’s simply callous to tell their daughters they’re not pretty. Some mothers, Sullivan says, go for a little subtlety, such as telling their daughters to put on some lipstick before they go, or discouraging them from eating certain foodstuff or they will go straight to their thighs. Nevertheless, it still hurts when mothers say these things, and it doesn’t matter if it’s said bluntly or more subtly.  These are mean things mothers say to their daughters that all moms should steer clear of.

Personally, however, the meanest thing on Sullivan’s list of things moms should avoid saying to their daughters is “You will never be able to do that.” If you’re a parent and you love your children, the thought of moms putting daughters down is simply appalling. Never ever discourage your daughter, or any of your children for that matter, from pursuing things that they love doing. Whether they want to become a doctor, a lawyer or simply win a local contest, always be there for your child – allow them to find out who they are, not who WE want our kids to be.