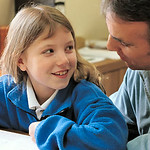 No one likes to face mistakes and failures over something, but they are an unavoidable part of life. In an article for PsychologyToday, Karen Salmansohn talks about two different theories of learning called “Entity Theory Way of Learning” and the “Incremental Theory Way of Learning”, both of which have a bearing on how to nurture resiliency in children.

We all make mistakes and face failures and learn how to cope with them and bounce back. That is one life skill that every parent should teach their children. Nurturing resiliency in children, however, can sometimes get a little tricky.

Simply put, parents who subscribe to the Entity theory praise the talents a child is born with. Typical compliments include “You’re so smart!” and “You’re so talented!” Incremental theorists, on the other hand, applaud a child’s effort more, and praise all the hard work, perseverance and dedication shown by the child regardless of the outcome.

Salmansohn says studies conducted by Dr. Carol Dweck, a leading researcher in the field of developmental psychology, reveal that students who are “Entity Theorists” actually fail more, succeed less and give up more easily because they tend to feel helpless after a failure. This makes sense considering that they believe success is an innate and unalterable thing.

“Incremental Theorists”, on the other hand, believe that failure is a result of not working hard enough, seeking help or accepting support. Success, to them, requires long-term discipline, effort, patience and courage, as well as help from other people. This way, success comes eventually to them because they are not likely to give up after making mistakes or failing.

We can nurture resiliency in children better if we subscribe to the Incremental Theory, and I wholeheartedly agree. I know of some parents who actually have very naturally talented and gifted children who were often complimented for their gifts by their parents every single chance they got, but ended up nowhere near the kind of success their potential promised. As it turns out, all that praise never taught them anything about discipline, effort, patience and courage so after making mistakes or failing, they just gave up.

So applaud a child’s effort more than their natural gifts, for that could prove to be more valuable to them in the long run in order to face mistakes and failures.

Focus on Hopes and Dreams, Not The Failures
Click here for more details