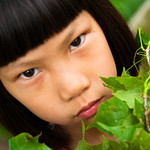 Scientists have found a genetic variation that appears to make people predisposed to focusing on the negative.

The Huffington Post reports that the genetic variation called the ADRA2b-deletion variant was identified by scientists from the University of Columbia, which suggests that a person with a negative attitude in life might just have been born that way.

The study, which was published in the journal Psychological Science, rapidly presented positive, neutral and negative words to 207 participants. Those who carried the ADRA2B-deletion variant manifested a higher likelihood of noticing the negative words. Still, those who carried the ADRA2B-deletion variant proved able to pick out the positive words better than they were able to highlight the neutral words, just like the participants who didn’t carry it.

Do you agree with the notion that negative people might just be born that way?

Three Things To Never Say To Your Children