Saying No To Your Kids 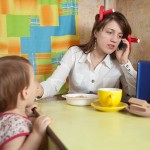 Kids will always be kids, and they will be asking you for something from time to time. There will be times when the request needs granting, but, more often than not, they’d be asking for things we know shouldn’t be allowed, like “Can I have ice cream before dinner?” or something that’s a bit too much for the moment, like “I want that giant robot right now!”. A responsible parent should always say “no” to either example, but we all know too well that it’s easier said than done.

Saying “no” to your kids can be really tough, and hearing the word from you can be that way for them too. Still, as a parent, you need to set rules and limits, and telling them “no” when they ask for anything that breaches those rules and limits is imperative. However, if you’re one of those parents who have a hard time telling your children that word, here are some tips that could help you in saying no to your kids.

We love our kids, but they can be quite adept at manipulating us into giving them what they want. They pester us in the form of asking overly nicely, throwing tantrums or just plain being persistent about it. Since most are busy parents who want nothing more than peace and quiet, they relent just to get some of that. However, you need to stand your ground, especially when the request is clearly not in keeping with the rules and limits you have already set. Give in to their badgering, and it’s open season on those rules and limits.

One other way kids get what they want is by playing parents off of each other. It may sound a bit devious, but it’s true that many children actually do this to get what they want. If one parent says no to something, he/she will run to the other parent who will probably grant the wish, often without consulting the other half.

Raising children—including saying no—require teamwork among parents. Parents need to consult each other when their child is asking for something. That way, both can say “yes” or “no” to their child’s requests uniformly.

Defer to the other parent

If your child has identified you as the one who easily gives in, you are a prime target. If saying no is that hard for you even when the request is a little on the unreasonable side, you can always say that you have to check with his/her mom or dad. At least you won’t be easily pressured into making instant decisions, and you’ll be showing your child that his/her parents are working together and therefore would not be easily manipulated.

Many parents play good cop/bad cop when it comes to dealing with their kids. One could be seen as the softie while the other could be perceived as the disciplinarian, and the one most likely to say no. However, being the one saying no all the time could take a toll on your child’s relationship with that parent. To be fair, parents should take turns in saying no so that the other could take a break.

Hopefully, the tips above can greatly help in your management of children who just won’t take no for an answer.

Teaching Kids A Lesson Without Punishing Them