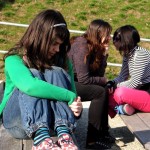 Bullying in schools has been around for as long as anyone can remember. Ask your parents about it and they’ll probably tell you about this one time some huge kid in their school demanded that they hand over their lunch money or else. In all probability, our grandparents had to put up with bullies in their school too.

Despite measures implemented by school administrators over the decades, bullying continues to give our kids in school a hard time. In fact, with the advent of this little thing called the Internet, bullying in schools just got a whole lot uglier. Now our children also have to put up with bullying online, better known as cyberbullying.

Cyberbullying is defined as deliberately or repeatedly threatening, harassing, humiliating, tricking, exposing, frightening or harming another person using technology, in this case, the Internet. The rise of social media sites and their popularity among our kids today just made it worse. Unlike traditional bullying, cyberbullying is essentially inescapable. Once launched online, a cyberbullying attack will follow our children no matter where they go. Cyberbullying in schools is more hurtful, damaging and harmful than traditional bullying.

One of the reasons cyberbullying in schools is worse than traditional bullying is the fact that victims often have no idea who’s bullying them. This anonymity has allowed cyberbullies to attack anyone they choose online with impunity, as school administrators and authorities have a very tough time tracking them down. Some cyberbullies are even resorting to creating fake social media accounts and posting embarrassing or scandalous content there to make them appear to have been posted by their targets.

In a number of cases, cyberbullying is sexual in nature. Many such cases have stemmed from a child’s poor judgment or naiveté in taking and sharing videos and photos that put them in compromising situations. The moment these images hit the net, they are then are shared by cyberbullies with such speed across social media platforms and mobile networks that by the time the victim goes back online, everyone at school and in the community have already seen and shared those embarrassing images. Taking them down, by this time, would be next to impossible.

The disastrous results of cyberbullying in schools

How to prevent cyberbullying

While we cannot completely prevent cyberbullying in schools from ever happening, it can still be limited and contained through more stringent school policies, awareness campaigns and most importantly, parental involvement. The first thing you can leave to school administrators, but we parents can play a major in the latter two and work hard to prevent cyberbullying in all its forms.

By using our Facebook and other social media accounts, we can help raise awareness about cyberbullying online. We can post statuses that we are against bullying in all forms, as well as news and other information related to the subject. If there are similar campaigns to prevent cyberbullying in schools being waged in your community, you can actively participate.

As for our kids, communication is always key. To spare them from becoming victims of a cyberbullying attack, we need to remind them constantly that they should be careful about what they post online—whether it’s an ill-advised statement/message or a compromising image—at all times. We also need to remind them not to take any pictures or videos that are sexual in nature. Should they become victims of a cyberbullying attack, we should talk about the incident with them with all the honesty and candor we can muster. We need to remind them not to respond to any such attacks and that we should instead report the incident to the proper authorities.

Prevent Your Children From Growing Up Entitled