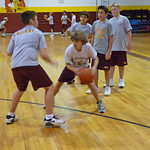 Coming at a time when many schools are implementing cuts on physical education programs, a new study conducted by the Institute of the National Academies reveals that more physical activity could boost grades of kids in school and make them happier as well.

As reported by EducationNews, the new study—and other studies before it—have shown that students absorb and process information more efficiently, concentrate better and achieve higher scores on standardized tests compared to sedentary students when they engage in physical activity during the day.

The study might make educators rethink the cuts on physical education programs, but they could find themselves in a dilemma since many schools have adopted more rigorous academic standards, which would naturally require more time. There’s also the fact that schools themselves have been limited by budget cuts for years.