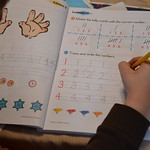 Girls are typically regarded as suffering more math anxiety compared to boys, thanks to the findings of a number of studies conducted in the past about the subject. A new study, however, has found that boys and girls go through similar levels of math anxiety, at least while they are in math class or taking a math test.

The study, which was published in the journal Psychological Science, aimed to make a distinction between the general anxiety felt by young people towards the subject and the math anxiety they feel when in math class or answering a math test. Researchers Thomas Goetz, Madeleine Bieg, Oliver Ludtke, Reinhard Pekrun, and Nathan Hall actually conducted two experimental studies. The first study was designed to compare the responses of its subjects—about 700 German students in grades 5 to 11—to a questionnaire designed to measure math anxiety during exams and their “real-time” reports of anxiety immediately before and during a math test. The second study, on the other hand, compared questionnaire measures of math anxiety with repeated real-time assessments which were gathered during math classes using mobile devices.

As the study itself concludes, I am hoping that these results will reduce much of the math anxiety among girls that eventually influences their choices in course enrollment, career, and lifelong learning in math fields. As they stand today, the fields of science, technology, engineering and mathematics are short on women, which can be blamed on negative perceptions they may have on their math abilities. We can only hope that the results of this study would make girls feel more confident about their math skills.

Read the press release about the study here.