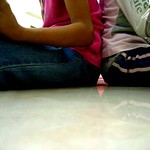 Much has been said and written about the success of the Buddhist concept of mindfulness in the Western world ever since Dr. Jon Kabat-Zinn developed a more secular version called Mindfulness-Based Stress Reduction (MBSR).

Suttie writes about the students of Toluca Lake Elementary School in Los Angeles, who regularly undergo mindfulness trainings. Once a week for 10 to 12 weeks, Toluca pupils are led by teachers through exercises focused on breathing, listening, movement, and reflection for a full 45 minutes. Ever since these mindfulness trainings were introduced in the school years ago, playground conflicts went down, there was less test anxiety among students, and their state test scores even went up, according to Steve Reidman, a fourth grade teacher at Toluca. The school has become a more peaceful place, clearly one of the positive effects of mindfulness.

A study conducted in six public schools in Vancouver also yielded similar results. With mindfulness trainings in schools, students have become less aggressive, less antagonistic towards teachers, and pay more attention inside the classroom. Best of all, those who went through mindfulness trainings in schools have reported that they have become more optimistic and have been feeling more positive emotions, which is something we all want for our own kids.

Now some parents might find the idea of a religion-based practice being taught in schools off-putting, but Suttie writes that teachers who teach mindfulness in schools have completely taken out the religious context and made it entirely secular. Then again, even if the religious aspects were somehow retained, I still would want my children to undergo mindfulness trainings in schools. I wouldn’t want them to miss out on something that will teach them stress management skills and ways to reduce depression and increase health and happiness, all positive effects of mindfulness that they could potentially carry for the rest of their lives.

How To Start Teaching Mindfulness To Your Students

Learning Walks – A Great Way To Connect Parents and Schools