10 Historical Moments That Happened Because of Math 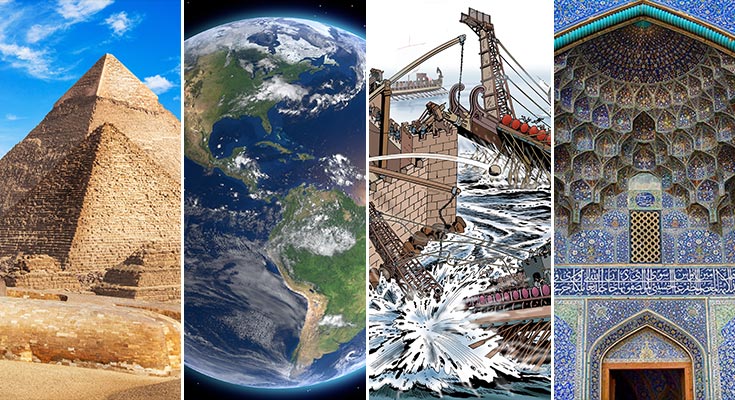 Has your child ever asked you what the point of learning math is?

Of course, there are tons of reasons why math is important and relevant in our everyday lives. From grocery shopping to being on time and planning a meal. But math also helped shape the world we live in.

We have gone through the history books and picked ten powerful examples where math made all the difference, at times changing our world forever.

Read on to find out what we found and share them with your kids.

Centuries ago, Egypt was one of the most prosperous and powerful civilizations in the world. Aside from their important contributions to society, they are also known for one of the most magnificent man-made structures in history. These are the Great Pyramids of Giza.

There are many theories that debate the true purpose of the pyramids, but it is widely believed that it was built as a tomb for King Khufu. Ancient Egyptians believed that when their king dies, part of his spirit will remain in his body.

Thus, they mummified the bodies to properly take care of the corpse. Then, they buried everything that the king would need in the afterlife, such as food, gold, furniture, and other offerings.

The great pyramids of Giza aren’t just a sight to behold—they are also a mathematical wonder! According to historians and scholars, its measurements and designs embody the concepts of the Pythagorean Theorem, the Golden Ratio, and pi.

But even with its impressive architecture, scientists haven’t fully discovered how the pyramids were built. One thing is for sure though: it wouldn’t be possible without the help of math.

Eratosthenes had heard that in Syene, a city south of Alexandria in Egypt, no vertical shadows were cast at noon during the summer. He wondered if this were also true in Alexandria.

As an experiment, he planted a stick directly in the ground and waited to see if a shadow would be cast at noon. It turns out there was one. So, if the sun’s rays are coming in at the same angle at the same time of day, and a stick in Alexandria is casting a shadow while a stick in Syene is not, he deduced that this must mean that the Earth’s surface is curved.

Using trigonometry, he measured how high the sun rose at the same time and day between the two cities. And alas, he managed to measure the circumference of the Earth even if his method was crude.

The discoveries of Eratosthenes and other scientists have helped shape our knowledge of what our planet is today.

Would you believe that Math can protect a city from being attacked by enemies? The subject that you always learn about in school helped Archimedes fight against the Romans during 212 BC.

When the Pro-Roman king of Syracuse died, a republic was founded to rule the city. The government rejected Rome and declared war against them. As a result, a Roman army led by Marcus Claudius Marcellus arrived to lay siege to Syracuse.

Archimedes devised several countermeasures against their enemy to protect the city from the Romans. Using his knowledge and skills in engineering, he designed catapults that can throw humongous rocks at their enemies. He also designed cranes that could release heavy rocks on Roman ships and sink them.

With these military tools, the people of Syracuse defended the city from the Roman cavalry. The central fortress held for a few more weeks until it eventually fell.

During the 18th century, the smallpox epidemic dramatically took the lives of many people, particularly children and infants. People who had smallpox developed a fever and a distinctive skin rash. It was a deadly disease, and those who recovered have permanent scars all over their body. Some of them were even left permanently blind.

As a solution, several intellectuals suggested that vaccination might stop the spread of the disease. Daniel Bernoulli, a mathematician, devoted his life to prove the benefits of vaccination.

Bernoulli published a study to disprove the people’s apprehension about the efficacy of vaccines because a lot of people were naturally apprehensive about the efficacy of vaccines. Using calculus and statistics, he proved that there is an increase in the life expectancy of infants who get immunity from smallpox by getting vaccinated at birth.  He argued that through vaccination, people can extend their lives for up to three years longer.

Readers and critics received Bernoulli’s work well, except for the mathematician Jean le Rond d’Alembert. Still, his paper was extremely valuable in the battle against smallpox. And in 1796, Edward Jenner was able to develop and administer the first ever smallpox vaccine.

Through Bernoulli’s mathematical brilliance, humanity was able to eradicate the deadly smallpox disease.

Did you know that the first helicopter was developed by a math prodigy? It was initially designed by the military to observe their enemies, as opposed to for transportation. As you have probably guessed, math played an important role in this invention.

The man who designed the first helicopter was Theodore von Kármán. He was a professor and esteemed researcher in the field of aeronautics.

During World War I, the military used observation balloons to observe their enemies’ movements. However, the balloons were an easy target because they were incredibly huge. Plus, they used helium to keep it afloat, which is a highly flammable gas.

To replace observation balloons, Kármán and his team used their knowledge in aeronautics to develop a flying machine with better features. He successfully designed a helicopter that rose up to 50 meters high and remained aloft for an hour.

However, it wasn’t similar to the helicopters that you can see today. Kármán’s helicopter was always held by cables and could not move horizontally (sideways).

Still, it paved the way for better aircraft models to be designed. This led to the invention of the first military helicopter, the predecessor of the modern helicopters being used today.

Humans would never be able to explore outer space without the help of math. Thanks to this interesting subject, we have learned so much about planets, moons, the sun, stars, meteors, and everything else about space.

On July 20, 1969, the first manned moon mission took flight. Neil Armstrong, Buzz Aldrin, and Michael Collins were the astronauts aboard the Apollo 11 spacecraft. These men bravely led the expedition to fly to space to become the first humans to land on the moon.

Math played a crucial role in this expedition. Getting to and from the moon required NASA to solve many mathematical problems. So, NASA formed large teams of scientists and mathematicians to solve them.

These brilliant people were able to figure out the paths for the spacecraft to orbit around the earth using geometry. They made precise mathematical calculations to work out how the spacecraft had to leave earth’s atmosphere. They also carefully calculated how the astronauts should pilot the spacecraft.

In aerospace engineering, math is also important in calculating the distance, speed, velocity, and the astronauts’ safety when designing a spacecraft.

One of the most important aspects of the entire mission was calculating the exact right angle of the trajectory for the rocket to enter the upper atmosphere after take-off. Had it been too steep, the astronauts could have blacked out or even died from excessive G-forces. Also the friction of the air drag could have destroyed the spacecraft. Had it been too shallow, the rocket would have catastrophically skipped off the atmosphere and back into Earth orbit.

This is a remarkable feat because the total computing power available to scientists in 1969 was so much less. In fact, an iPhone 6 from 2015 runs 32,600 times faster than the best Apollo era computers and can perform instructions 120 million times faster.

Apollo 11 traveled 240,000 miles to reach the moon’s orbit. Operating the lunar module, Armstrong and Aldrin separated from the command module and descended to the moon’s surface.

As Armstrong stepped off the ladder and planted his feet on the moon’s surface, he spoke his famous quote, “That’s one small step for man, one giant leap for mankind.”

The Apollo 11 expedition was a monumental moment for mankind, which wouldn’t have been possible without math.

During World War 2, the German Air Force and Navy would send thousands of coded messages to each other every day. They were generated by Enigma, the German’s brilliant typewriter-like cipher machines.

The coded messages contained situation reports and immediate orders. These were incredibly important for the British to understand, as they could help win the war. However, it took British Intelligence a long time to crack each code, and by that time it was already too late. Thus, they needed something that could decipher the messages quickly.

Alan Turing, a mathematician and computer scientist, created a code-breaking machine that cracked thousands of coded messages from the Germans every month. This machine, called Victory, was able to decipher two messages each minute. This helped the British avoid enemy attacks and plan countermeasures with great speed.

One day, they received news that German submarines were attacking Britain’s cargo ships containing essential supplies. If all of those cargo ships sunk, Britain would have seen starvation. And to make things worse, they found it difficult to locate the positions of the enemy submarines.

Fortunately, Turing and his team successfully cracked the submarines’ communication lines. They were able to identify the submarine’s locations and allowed the cargo ships to dodge their torpedoes.

Alan Turing and his expertise in math helped save millions of lives and shortened the World War.

Can you imagine living without the Internet? It would probably be difficult for us because we’ve been using it for almost anything. However, it wasn’t all that long ago when the World Wide Web was first made available.

In fact, the Internet was not intended for browsing through social media apps or watching YouTube videos. Scientists initially used it to share and access information between several computers.

In 1991, a computer programmer named Tim Berners-Lee introduced the World Wide Web. It was a “web” of information that anyone on the network could retrieve. It later evolved into the Internet that we know today—searching for information using browsers, chatting via messaging apps, playing online video games, and so much more.

Math isn’t just used for solving and calculating—it can also be used in designing! One particular example is the Islamic architectural decoration. Tessellations, which are a type of geometric pattern, adorn mosques with their intricate designs.

A tessellation is a process of covering a flat surface with a pattern of flat shapes so that there are no gaps or overlaps. Islamic buildings use ceramic tiles with tessellations on the floors and walls. One example is the Sheik Lotfollah mosque which is notable for its complex geometry and tiling.

Would you believe that math can also be applied in paintings, drawings, and sculptures? Yes, it’s possible! And this was proven during the Renaissance period when the development of linear perspective started.

What other interesting stories do you tell your children to convey the importance of math? Share your ideas in the comments below.