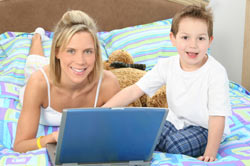 There are many math practice games available online, but I’d argue that what you really want is an intelligent math facts game.
The reasons are simple. First, you want to practice what needs to be practiced, and not what’s already mastered or what’s too hard. And second, you want to know when you’re done.

That is why an intelligent math facts game like MathRider will logically be the fastest route to math mastery.

In our recent article ‘the best way to master math facts‘, we covered the results of a research study from Purdue University, published in January 2011. In that study, the researchers found that repeated practice is the most effective way of learning and remembering material.

Of course, we are talking about young children here. So simply asking them to sit down and repeatedly solving math problems is not going to fly. Kids have a natural (and very healthy) need to play. For most kids it is plain torture to ask them to sit down and go through math practice questions on worksheets.

Which is why many places are offering this practice as computer-based, interactive games. But there the problem is that most math facts games are still very dull, repetitive and, random.

Given that you have to repeat questions in order to maximize learning (as the Purdue research clearly shows), any serious math facts game will have to be repetitive. So the best angle to take on this problem is to make the repetition as quick and as efficient as possible.
In other words, no long runs across corridors in between two questions and no random numbers. Just full-on rehearsing of math facts, wrapped in storylines and motivating your child with clear progress indicators and rewards.

The Origin of Our Math Facts Game

As told by our founder, Thomas Brand: Before I ever embarked on creating MathRider, I tried helping my own kids with math. There was some success, but it took a lot of time and energy. We made up pretend games, told our kids stories and drew things on their little whiteboards. It was great, but it wasn’t enough. So I turned to looking at computer games and bought quite a few. None of them worked for the kids. And one day I had an idea about a math facts game that would be fun to play, easy to operate and would not demotivate, but rather encourage them.

Built and Enhanced, Based on User Feedback

Fast forward to 2011 and you have MathRider in its current form. It has been updated numerous times and we keep updating it, based on our own observations and feedback from parents and educators like yourself.

So if you haven’t given MathRider a try yet, why not download the latest version, full-featured, for a free trial now?

And see how this intelligent math facts game really stacks up.

Math Facts – The Top 3 Reasons Why Kids Must Master Arithmetic