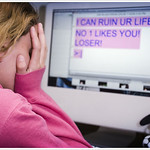 There was a time when bullying was limited to schools and street corners. For a constant victim of traditional bullying, the nightmare at least ends when they get home. That, however, just isn’t possible with this new scourge called cyberbullying.

Defined as deliberately or repeatedly threatening, harassing, humiliating, tricking, exposing, frightening or harming another person using technology, cyberbullying is more hurtful, damaging and harmful than traditional bullying. Worse, with social media sites being that popular among our children today, cyberbullying is essentially inescapable once launched online. It is, for all intents and purposes, one of the most threatening issues facing our children—the social media generation—these days.

Needless to say, cyberbullying should never be tolerated, and should be dealt with by parents in cooperation with school authorities and if need be, the police. If you suspect that your child is victim, here are some tips on how to deal with cyberbullying.

1. Talk to your child

Most cyberbullying victims don’t like talking about it, especially to their parents. To actually be able to do something about it, you have to get your child to open up, which we understand isn’t easy. You can start by asking open-ended questions, like “what did you like the most about your day?”, then segue to “what was the most frustrating part of your day?” When talking to your child about this issue, remember not to be judgmental and listen intently. Do not threaten your child with lost Internet or cell phone privileges if they don’t speak up immediately. Give the assurance that talking about it is okay, and that you will work together to stop it.

When your child finally opens up about being a cyberbullying, sit down with him or her and, with permission, go through his or her Facebook, Twitter and other social media accounts, as well emails. Take screenshots of every single instance of cyberbullying as evidence.

Once you have identified who is behind the cyberbullying of your child, waste no time in blocking him or her from your child’s social media account. If the cyberbullying is being done through text messages or phone calls, ask your cell phone carrier to block certain numbers so you won’t be receiving any more harmful messages or calls.

4. Talk to the parents of the bully

Talking calmly to the parents of the bully has often yielded positive results. Just approach them with evidence of their child’s cyberbullying (the screenshots you’ve taken) and ask them to have their kid stop bullying their kid.

If the cyberbullying continues despite talking to the bully’s parents, pressing charges is the only logical step. Bullying of any kind, after all, is illegal in most states. Report the cyberbully to administrators of the school he or she is going to. If the cyberbullying involves threats or acts of violence, go to the cops. Either way, the cyberbully will likely be suspended, expelled or even arrested, depending on the severity of the act.

To prevent future incidences of cyberbullying, parents must take on a more active role in their child’s online life. You can start by monitoring your child’s use of computers, email, tablets, smartphones and text messaging. To monitor your child’s online activity, there are parental monitoring software that you can download. It is important that you let your child know that you are doing all these so there will be no trust issues. Most importantly, you should encourage your kids that if they are cyberbullying victims, they should never hesitate telling you about it so you can deal with cyberbullying together.

How to Deal with Fear of Failure in Children