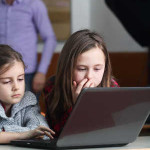 No one can deny that social media, as it stands today, is an essential part of our everyday lives. This is most especially true of our children, teenagers in particular. Practically all teenagers spend a lot of their time on social media sites, and that, per se, is not necessarily a bad thing. Social media sites, after all, have a lot of good things going for them. For one, they help kids stay connected with family. Social media can also help teach social responsibility to our kids to the point where they can join non-profit and charity campaigns. Their creativity may also be enhanced as ideas, music and art are freely shared and discussed on social media.

Social media, however, can get real addictive, and addictions of all forms are certainly not good for anyone, especially our children. It is our responsibility as parents to put some limits on their use of social media. Then again, how much social media is enough to force us to intervene and put our foot down? You’ll know your kids have had enough social media when:

1. Their faces are buried in gadgets all the time

It is not an uncommon sight for kids to be on social media even in the middle of family dinners, school activities or even gatherings with friends, no thanks to the ever-growing presence of social media platforms on smartphones and tablets.

2. It starts to impact their sleep

Parents complain that sometimes, when they wake up in the middle of the night and instinctively check on their children, they catch them actually still online checking out social media posts. Considering that children need sufficient sleep, it would be safe to say that too much social media can indeed impact their sleeping patterns, which would then lead to a lot of other adverse effects.

3. They lack interest in other activities

Life can be full of activities that are certainly more fun than just staring at a screen all day, but when your kids would rather do that than spend time with friends or go to the movies or any other activity with actual human contact, it may be time for you to do something about it.

4. They’re starting to get lower grades

Middle school, high school and college students who checked Facebook at least once during a 15-minute study period received lower grades, according to a study. This shows how much of a distraction social media can be.

5. They post even the most inane details of their day

Being on social media means almost always having to share certain details about your life, but you can tell when people are spending too much time on social media based on the things that they post on a regular basis. For instance, when your kid posts “Taking a shower” and follows it up with a “shower done” a few minutes later, it could indicate your child is having too much social media time, when even the most inane details about his life make it to his posts.

As a parent, it is your responsibility to observe your kids and see if they are showing signs of being addicted to social media. And if those signs do show up, you are in a position to intervene. Then again, totally banning social media from their lives would be unwise. Social media, after all, is already an undeniable part of your children’s lives in this day and age. Taking it away could only make things worse.

The best thing you can do is try to help your child set a screen time at home, when it’s alright to be on social media. Implement a strict “no social media time” at home, and have them do other more enriching activities instead for the duration of that period. It may not be much, but you are at least taking some of their social media time away and diverting their attention towards other things in their lives. Social media is a part their lives, but it certainly should not be the focus.

How To Deal With Cyberbullying
Click here for more details