How To Get Your Kids To Stop Unwanted Behaviour 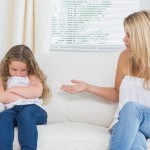 Our children may be well-behaved in general, but there will always be times when they’ll exhibit some behaviours that we parents could only call unwanted. Chewing loudly, yelling for no apparent reason, doing the exact opposite of what we tell them are just some of these unwanted behaviours that we wish our kids would just stop.

You see, we parents have this tendency to tell our children “don’t”, a lot. Whenever we see unwanted behaviour in children, we automatically say “don’t (insert unwanted behaviour here). In all fairness, there is nothing wrong with telling them what they should not do. When we tell them not to chew loudly, yell, or play too close to the street, we are, in effect, setting standards that they have to follow for their own good. That’s all right, but maybe we need to do something about the negativity that’s attached to telling them “don’t (insert unwanted behaviour here) all the time.

When our command focuses on the negative, your child’s sub-conscious will always hear it. That means it is bound to be acted upon sooner or later. So when we tell our children not to play too close to the street, they will eventually play too close to the street. Tell them not to chew loudly, and they most probably will do exactly what you told them not to do. After all, the negative comment is all that they heard.

Stop unwanted behaviour with something positive

To further drive the positive into your child’s sub-conscious, it might help if you lower your voice. Come to think of it, speaking in a raised voice to your children does not really get positive results, so always speak in a lower or even voice when talking to your kids.

As stated previously, it’s all right to tell your children not to do certain things for the sake of setting behavioural standards for them to follow. You just need to improve the way we tell them “don’t”. Just saying something positive after the negative admonishment or criticism is one tiny communication tweak that makes a lot of difference.

Are We Treating Our Kids Worse Than Inmates?
Click here for more details