Do We Still Need Classroom Desks? 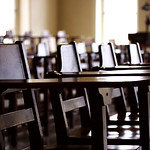 I came across this piece written by Carl Hooker for Edudemic. Actually, Hooker presents it as an obituary for classroom desks, which, according to him, have already outlived its usefulness in classrooms, thanks to modern technology. It’s a rather amusing but thought-provoking take on the history of student desks and how they are unnecessary in the classroom.

Hooker relates how student desks has evolved from the cast iron and wood desk patented by Anna Breadin in the late 19th century to the personal canvas for graffiti and doodles it became for countless students in the 1970s and 1980s. He also humorously points out the downfall of classroom desks with the advent of mobile devices in the classroom such as smartphones and tablets. By this time, classroom desks have become nothing more than an obstruction for students who, these days, need to be able to move around the classroom more freely. He ended the piece by saying that the student desk took its own life by throwing itself into a wood-chipper.

The article was actually really funny, but it did bring up some legitimate points. Personally, I applaud the notion of being flexible with arrangement, because the absence of classroom desks allows students and teachers to move around more freely and change arrangements quickly. However, deep in my heart, I know we still need student desks. After all, where are students going to rest their mobile devices in the classroom, as well as their notepads and laptops?

What will the classroom be like in 5 years according to IBM?