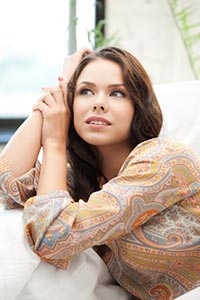 Concerned about your kids daydreaming too much? Daydreaming is a very normal and healthy thing for our children. But did you know daydreaming helps adults, too? Here are some interesting facts about the benefits of daydreaming for adults.

Or at least keeps you in the company of the young. It is, after all, a symptom of youth. A study at the University of North Carolina, Greensboro has concluded that distractions—daydreaming included—are far more common among the young. So daydream away, right alongside your child if you want, and enjoy the benefits of daydreaming together.

The subjects of a study conducted at the University of California at Santa Barbara were given problems to solve, then asked to space out or daydream for 12 minutes before turning their attention back to the task at hand. The result? They were 41% more effective at solving the problem, which suggests that we are actually unconsciously working on how to go about a task even as we stare off into space and dream about surfing the waves off the beaches of Hawaii. This is the one of the more widely-accepted benefits of daydreaming.

Work or school can get really overwhelming at times, and that leads to heightened stress levels, which raises our risk for a host of medical conditions including hypertension and heart disease. According to the Anti-Stress Center, daydreaming lowers stress levels because it is a form of self-hypnosis that is deeper than most people would think.

A study out of New York University has shown that one’s memory can be improved by drifting into la-la land every now and then. The subjects of the study who were made to do certain tasks without taking a break had poor memory. Those who were allowed to take their minds off the tasks at hand every now and then remember more.

5. Daydreaming reminds you of larger goals

Usually, one of the brain’s two networks is turned off when the other is on. A study at the University of British Columbia, however, says daydreaming activates both the “default” network, which is associated with creativity and self-reflection, and the “executive network”, which is responsible for planning and problem-solving at the same time. It is suggested that when the two networks mix, the human mind pushes the present into the backseat, and allows the bigger picture—your goals, plans and problems that require your attention—to come to the fore.

Are there things in your life that you’d rather forget, such as heartbreak or tragic events? Escape by letting your mind wander off to things that are the exact opposite of that experience. If somebody broke your heart, daydream about finding someone new and living happily ever after with that person. If you lost a loved one, think of that person as if he or she were still there with you. Sure, daydreaming won’t change reality, but it will at least induce some sort of “amnesia effect” that will help you get rid of some details about any bad experience you may have gone through.

So if your child’s teacher reports to you that your child frequently daydreams during class, don’t make too much out of it. Your child may just be doing what every normal kid his age—or any adult person, for that matter—would do every now and then.

How To Improve Or Maintain Perfect Eyesight For Kids And Adults

Ten Great Benefits of Reading for Your Child