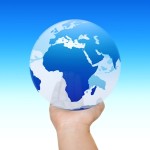 Children know the world is round. After all, it’s a concept that has been driven home into their heads for as long as anyone can remember. However, while children appear to understand that the earth is indeed round, this fact still does not reconcile with how kids view the world. At least that is what Kristina R. Olson says in an article for Psychology Today.

How kids view the world: Children know the world is round

Citing studies conducted by psychologist Stella Vosniadou, Dr. Olson relates how children, despite effortlessly parroting back the information that the world is round, their understanding of it crumbles when pushed. Asking children to draw pictures, most of them came up with drawings of a world that has edges. This suggests that despite actually knowing that the world is round, they still experience it as flat. Some of their drawings even suggest that they have this belief that people can actually fall off the earth.

Dr. Olson proceeds to tell parents to try this little experiment at home:

Ask your child to draw what the whole world looks like. Once that’s done, ask your child to add himself to the picture right where he’s standing. If the drawing of your child is in the center, ask him if he is inside the circle or on the outside (if he’s on the top of the circle is more obvious he’s on the outside, but if he draws himself in the center it’s unclear if he lives on top of the circle or inside of it). Now ask your child to draw a person in China (or if you are in a location outside of North America, offer another place halfway around the world). Does this person appear also on the top or somewhere else? Next ask your child to add the stars, sun and other planets. Does he appear to understand these surround earth (indicating an understanding of the universe) or are they only right above the earth and presumably above the child’s head? Finally, for fun, ask your child what would happen if he decided to walk and walk and walk. If he suggests an ocean would appear, ask what if he had a boat and could keep going. Does your child say that he’d get back to where he is (suggesting he has internalized the world as round) or instead that he’d eventually run into something or off of the edge?

What Dr. Olson is saying is that children may have no problems absorbing the rules of physics, astronomy and biology, but they do tend to have trouble integrating it with their own experience. However, children do take new information to heart and will eventually develop an understanding of the world that is so much more updated than their previous view. It just takes some time, says Dr. Olson.