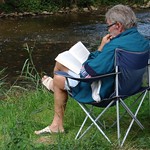 If you’re one of those people who love to read, then you’re on the right track towards growing old sharp as a whistle. A study published in the July issue of Neurology says that people can boost brainpower in old age by reading, writing and engaging in other activities that stimulate the brain.

According to Dr. Robert S. Wilson, senior neuropsychologist at Rush University Medical Center in Chicago and co-author of the study, exercising the brain by participating in mental exercises across one’s lifetime is essential for brain health when growing old.

The study had 294 participants, all of whom have since died and donated their brains for examination post-mortem for tangles, lesions, and plaques, which are hallmarks of Alzheimer’s disease. The research team had all of them take cognitive tests designed to examine their memory as well as the clarity of their thinking for about six years before their passing. The participants also answered questions as to the mental exercise they engaged in during childhood, adolescence, middle age and at their age at the time of the study.

Those who have been performing mental exercises like reading, writing and playing brain-stimulating games their entire lives experienced fewer cognitive issues. In short, they actually managed to boost brainpower in old age by reading and performing other mental exercises regularly. In addition, they did not show any symptoms of Alzheimer’s, even though some of them have been found to have tangles, lesions, or plaques in their brain.

Dr. Wilson pretty much summed up the importance of mental exercises by saying that “we shouldn’t underestimate the effects of everyday activities, such as reading and writing, on our children, ourselves, and our parents or grandparents”.

These results absolutely underscore how important it is for us to encourage reading in children as well as cultivate a love for  writing and playing brain teasers among them. We’ll be doing them an enormous favor that way. As for parents who think it’s too late for them to become bookworms or dissectologists, think again: The same study says those who took up mental exercises later in life lowered cognitive deficits by 32 percent. Those who didn’t bother to engage in mental exercises, on the other hand, suffered cognitive decline 48 percent faster than usual. So if you’re a thirty or fortysomething parent who doesn’t read or do mental exercises much, how about challenging yourself now and engaging in mental exercises side-by-side with your kids?